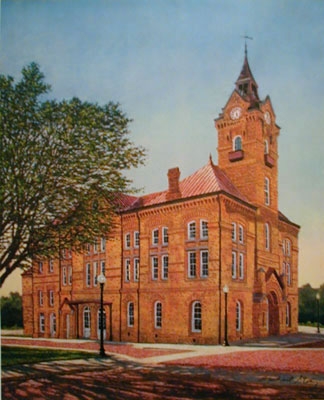 The Newberry Opera House has been the heart of Newberry County since its dedication in 1882. Designed by G. L. Norman and built at a cost of $30,000, the building is an example of Victorian civic eclectic architecture.  The French Gothic clock tower dominates the city’s skyline.

It was designed as a place of entertainment for the local citizenry and as a seat of government for the city and constructed with brick from three local brickyards. The granite came from a quarry approximately two miles outside of the city limits.   The talents of local craftsmen in woodworking and masonry were used throughout the construction.

The original design called for the first floor to house the fire engine room, council chambers, a clerk’s office, a police officer, and three jail cells. The second floor was a hall 53 by 52 feet with a stage 29 by 52 feet. In connection with the hall were a ticket office, a "green room", a cloakroom, and three dressing rooms.

The building has a tower 130 feet high topped with a garfish weathervane, and the tower houses an E. Howard Tower town clock, 90 feet from the ground.  A gas lighting system was installed with a reflector, or "sun burner", for added brilliance. Drop curtains and seven scenes for the stage were provided. One scene, a landscape, survived to the late 20th century.

The Opera House quickly became known as "the entertainment center of the Midlands.”  On its stage appeared touring companies of New York plays, minstrel and variety shows, famed vocalists and lecturers, magicians and mind readers, novelty acts, and boxing exhibitions.  Tallulah Bankhead, Tex Ritter, and members of the famous Barrymore family are said to have performed in the historic structure.

The Opera House was used not only by professional performers but also by the community. Meetings, dances, college commencement exercises, and musicals were held in the spacious auditorium. Silent "moving pictures" were shown in the early 1900s.   A "Thomas Edison Talkie" was presented in the late teens, using a phonograph record for sound. Slowly, movies replaced the big stage shows, and in the 1920s the Opera House was remodeled as a movie theater.

In 1952 with the showing of The Outlaw, the Opera House closed as a movie theater.  By 1959, there was talk of tearing it down, but a public outcry stopped the wrecking ball.  In 1969, the Newberry Historical Society promoted the preservation of the Opera House, as did several other community groups and in 1970 the building was placed on the National Register of Historic Places.   Talk of restoring the building as a performing arts venue was ongoing through the 1970s and 1980s.  Citizens such as Dr. Jim Wiseman kept these talks alive.  They knew that restoration required significant planning and resources so they established the Opera House Foundation to study the feasibility of restoration.  They consulted with historic renovation specialists, engineers, and theater consultants from South Carolina and around the country, all of whom agreed that the Opera House could be renovated and returned to its original use as a venue for the performing arts. 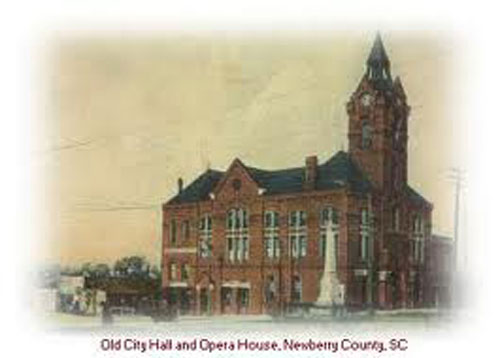 A serious fundraising program began, concentrating on national grants and local support.  A renowned architectural firm, Craig, Gaulden & Davis, Inc., which had successfully completed such projects as the Peace Center in Greenville, SC, developed the drawings. Experienced theater consultants recommended design features to maximize the quality of the theater’s acoustics, comfort, and esthetics.

The exterior restoration and window replacement were completed in 1994 and interior renovation began in 1996.  The restored structure married historical accuracy with a state-of-the-art performance space equipped with superior lighting and sound systems and a Bayreuth orchestra pit that easily accommodates Broadway and operatic productions. The theater boasts a full-size rehearsal hall with an acoustically soundproof, electrically locked door.  Restoration also included a 10,000-square-foot addition to house a new loading dock, an elevator, a second stage for rehearsal, and dressing rooms. The improvements for the building incorporate full accessibility and an assisted hearing capability (TDD). The seating capacity is 426.  The total cost of the renovation was approximately $5,500,000.

Following restoration, the Opera House reopened in the fall of 1998.  The House has played host to thousands of performances from Grammy winners to internationally renowned performers to regional and local acts.  Stars such as Willie Nelson, Roberta Flack, Wynton Marsalis, Michael Bolton, Olivia Newton-John, and even Flava Flav have graced the stage.  The 150+ events a year range from country, folk, and bluegrass to classical, operatic, and ballet; from theatrical productions to family adventure shows featuring everything from dog shows and ice shows to puppets made of light.  In addition, the Opera House brings traveling exhibits, such as the Smithsonian’s Crossroads: Change in Rural America.

This infusion of artists and visitors into the community has led to an economic rebirth and a growing reputation for Newberry as an arts center and arts destination.  Hotels, restaurants, specialty shops, antique malls, a variety of art galleries and studios, and art programs for children and adults  - all are part of the impact of the Opera House.

The Newberry Opera House is a 501(c)(3) organization operated by the Newberry Opera House Foundation.  As a nonprofit and community institution, the Opera House is also a place for public meetings, school performances, and local artist opportunities.  In order to make sure that the Opera House is serving the whole community, an initiative called Newberry Arts for All (NAFA) was created.  It sponsors free outdoor concerts, ticket scholarships, student performances, and a summer Astronaut STEAM camp.   Partnerships with the city, the school system, Newberry College, the local arts community, and area non-profits ensure that diverse voices and interests are fully represented in programming, board membership, and decision-making.

In 2004, the Newberry Opera House Guild was created.  It provides financial support and helps promote the Opera House throughout the Midlands. The Guild is open to anyone with an interest in helping to raise funds to support the performing arts and in helping to educate and enliven the surrounding communities through the arts.

NAFA, the Guild, and the many outreach efforts bring citizens from all walks of life into the Opera House where everyone is made to feel welcome.  We can't wait to welcome you home soon! 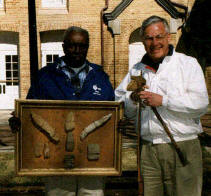 For nearly 25 years, Mr. Walter Sims has served our community, working with Fulmer Wells and caring for the Newberry Opera House. As custodian of the Opera House one can only imagine all that he was able to see and do because of this job, the stars promoting the movies he must have seen and the local citizens he met. He felt in his spirit a close personal attachment to the magnificent structure. As anyone who has responsibility for a building can attest, an inanimate object can take on a personality of its own.

These are the thoughts that must have been on Mr. Sims' mind when he gifted the Opera House with a donation of major importance. The gentleman left his collection of arrowheads and Indian artifacts to the Opera House. This collection, which he had personally gathered during his life, was once proudly displayed over his fireplace. Mr. Walter Sims was born in Newberry in 1923 and died in 1998. He graduated from Drayton Street School. He joined the military in 1942, where he served first in the Artillery and then in the Signal Corps. It was in the Signal Corps that he fought in Europe in Belgium, France, and Germany during World War II.

In addition to his love of Newberry and of the Opera House, Mr. Sims was an avid reader and historian. His historical knowledge, mainly self-taught centered on Newberry County. This fascination with our history led him to begin collecting arrowheads, points, and prehistoric Indian artifacts. Over his lifetime, Mr. Sims collected well over 100 artifacts.

A local businessman commented about Mr. Sims: " he had so little—but he gave so much. He seemed like one of many but he stands above most. He may have had little education but he knew so much. A man whom few of us knew, or even knew about, he has set an example for all of us to follow."

The citizens of Newberry are indebted to this unselfish individual for his dedicated service, his generous gift, and for his inspiring example. He has re-taught us all the age-old biblical lesson when he gave his most prized possession to the project which he loved.

When you enter the Opera House and see the wall of honor recognizing the generous donors to the Opera House, let us also pay tribute to an exceptional man – Mr. Walter Sims.