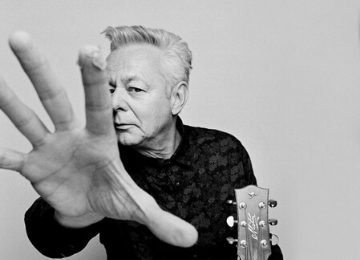 Q: At what point did you feel that you were destined to make music your career?

A: I never had any other thought in my mind since I was five years old. It became my career and calling. When I was little, the audience lit up and I knew that was what I wanted to do, because it made people smile and get into it. I’m always hoping to write new songs because I am a composer as well, but I am mainly an entertainer because I like to give my audience a good time and that’s what it’s really about. To come in and play a theater like the Opera House is just a joy to me because it’s a perfect setting.

Q: What advice would you give to a young musician first starting out?

A: You need to be inspired to work. There’s a lot of work behind it and there’s a lot of dedication. Learn some good songs that really keep you interested, that challenge you. The more songs you learn the more you learn about the instrument itself.

Q: What is your favorite song to perform and why?

A: There’s no thrill like playing one of your original compositions for an audience. Of course, people sing out for Beatle songs and iconic songs that they know. You always have to remember that you are playing for the people, so have a bit of everything in your repertoire.

Q: Who was your biggest influence?

A: There are so many influences. When I was a kid, we all listened to Hank Williams, Jimmy Rogers, Hank Snow, Chet Atkins, Merle Travis and then Jerry Reed came along and just blew the roof off everybody. I listen to Grady Martin, who played on El Paso, the great song by Marty Robbins. If you listen to El Paso, it is one of the greatest lessons in guitar playing. Every bar in that song is perfect and he is showing us the depth of his knowledge. When I discovered classical music, I loved listening to Segovia and John Williams, Julian Bream and, of course, the Beatles were probably one of my biggest influences, and still are. But as a guitar player, I listen to everybody, from George Benson, Django Rhinehart, Wes Montgomery and James Burton who was with Elvis.

Q: With whom would you most like to collaborate?

A: I think it would be a wonderful experience playing with George Benson. We’ve been to each other’s shows but we have never played together. I have played with Richard Smith, who is on the schedule at Newberry [Tribute to the Guitar Legends on March 21, 2021]. He is one of my all-time favorite guitar players. His arranging skills and knowledge are on another superhuman level. When Richard plays Scott Joplin tunes, he really fills my soul.

Q: How do you feel the internet has impacted the music business?

A: The internet has joined us altogether. People come to my show and say they discovered me on YouTube. Whatever it takes to get the music out there to make people feel good is okay by me. It has spread music all around the world.

Q: If you could change anything about the music industry what would it be?

A:  I would love to create a record label that specialized in marketing young guitar players, to give them a bigger platform.

Q: In years past you have taught Master Classes at Newberry. Where does teaching fit into your career?

A: Being a performer is everything to me, but being a teacher is important. What I try to do is not only answer people’s questions, but also let them know that there is no shortcut in this business. You must get out there and get to work, put the time in, be willing to start out small and build yourself up.

Q: You signed guitars Tommy Emanuel, CGP. Please tell us about being one of the few people in the world with the title “Certified Guitar Player.”  How does one qualify to be nominated?

A: It was an honor given to me by Chet Atkins - Chet, Jerry Reed, Steve Warner, John Knolls and myself. And at the end of his life, they awarded the same award to Paul Yandell, Chet’s accompanist. On my award, it says “For the lifetime contribution to the art of finger picking”. It’s a big statement from the chief, so I was very honored. Once he gave me the award, he said I must sign CGP, Certified Guitar Player, after my name every time.

Q: How did you develop such a unique technique, using the guitar as a musical instrument and as a percussion instrument?

A: Well, that all came about in the seventies when I was using an acoustical guitar, I turned it and banged on it and made it sound like a drum. As electronics and acoustical guitars got more sophisticated, we were able to put a microphone inside the guitar. That opened my world right up and I was able to get sounds that you normally wouldn’t imagine. I’ve been playing drums all my life. I am also a bass player and a guitar player. I combine all three when I play the guitar. It isn’t something that I learned. It is something that I just worked out and has evolved with my style. I think like a band when I am playing.  People get confused and think I have backing tracts or other people behind the curtain. What I do with that is I turn the guitar up really loud, on the verge of almost exploding. It’s pushing the envelope. You get the guitar to sustain and ring out and then I use a digital delay which I play along with. All these sounds are playing at the same time while I keep triggering this delay and what it does is sets up this groove which is very deep and then I play the melody. It takes a lot of invention to come up with stuff, so I use all of the elements that I can. I use the guitar and its electronics. I have the monitors on the stage and when I turn them up it sustains the note. I scratch the face of the guitar up which creates the sound of wind and rain and I hit the guitar which sounds like thunder.