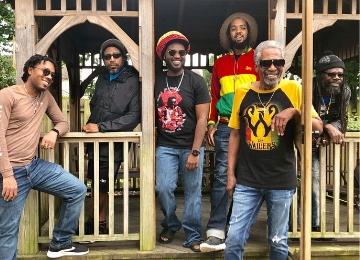 Grammy® Award-winning producer, bandleader/drummer, Aston Barrett Jr., is the son of Aston “Familyman” Barrett, the bassist and producer for Bob Marley & The Wailers. He is also the nephew of drummer Carlton “Carly” Barrett and Grandson of the late Joe Higgs (mentor to Bob Marley).

While he and his mom would later move to the states, Aston Jr. was born in Kingston, Jamaica with reggae in his blood. With over 30 children, Aston Jr.’s father did not have to choose him to lead the famous Wailers band upon his retirement. Aston Jr. started proving his talent when we joined his first band at seven. He would go on to be the bassist for Julian Marley and tour with Lauryn Hill.

Aston Jr. also impressed his dad with his respect of the music from the late ’60s and ’70s. He comments, “Artists were creating their own music style. They took pride when recording their sound.”

Aston Jr. prides himself on knowing a lot of Bob Marley and The Wailers history. When asked about carrying on the legacy of albums like “Exodus,” which “Time Magazine” declared the “album of the century,” Barrett shares his pride in his father’s dedication to a quality production. He tells about his dad and Bob working on the album in London, “That album was actually an experiment, my father said. Tyrone Downie went to the music store and bought a Jazz funk album. They told Bob what they was buying and about all these new keyboards that had come out in 1977 in England [that the Jazz artist was using]. And if you know England power supply is much stronger than American power supply. So when you’re recording stuff in England it has a different sound.  They got Junior Marvin, who came in the band at that time. He was more Jimmy Hendrix kind of vibe.

“They mixed that album about three or four times before it was properly done. When they mixed it the first time, it was too reggae. When they mix it the second time, it sounded more like an Al Green album. So - you know -  it wasn’t right yet.

“Because the original guy that they wanted to mix the album had mixed ‘Rastaman Vibration,” but he wasn’t available. Whoever Bob and my father brought into mix, they couldn’t get to that sound. Eventually, they had to do a whole bunch of experimenting and rerecording but it paid off.”

People attending the show at the Newberry Opera House this May can expect many Bob Marley favorites from all his albums. But, The Wailers also plan to bring some new styles and messages, including songs from the new album, “One World.”

After over 25 years, The Wailers released their album, “One World,” including 14 songs with its single, “One World, One Prayer.” The single was produced by 19x Grammy® Award winner Emilio Estefan and co-written by Emilio Estefan alongside Aston Barret Jr. and Josh David Barrett.

When asked about carrying on Bob Marley and The Wailers tradition, Aston Barrett, Jr. said, “I feel very honored and very privileged. And, also honored my father trusted me to keep the sound and the message…My job is the keep that Barrett sound, that Wailers sound.”